Upon hearing about the death of Tom Hayden, I decided to write a little something about him. He was a person who spent his entire adult life trying to help his fellow citizens – not just fellow citizens of the U.S., but fellow citizens of the planet. Mainstream history (besides being mostly fabrication and White-washing) usually mentions the word “hero” in nationalistic terms – what a person did for their nation. It’s one of the tactics to keep us divided and more easily subdued.

Occasionally we come across people who actually take action to help the planet as a whole. Huey Newton and Bobby Seale are two examples that come to mind since the world is currently celebrating the 50 anniversary of the Black Panther Party. Of course, many people will tell you that the Panthers fought for the liberation of Black people. This is true, but they also spoke about the need for the oppressed people of the entire planet to join forces in order to conquer the oppressors and install a system that serves all of the people. 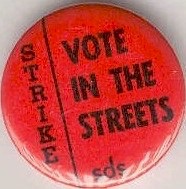 Tom Hayden was part of the same basic struggle during that crucial time in history when young people rose from the stupor of ignorant nationalism and obsessive self-gratification in the aftermath of the Second World War to make changes in society. These people attempted to enlighten an entire generation about the evils of a system that favored one segment of the population over the rest; rewarded greed, selfishness and violently dysfunctional behavior as a way to deviously perpetuate this system and allowed a military machine to run amok regardless of the destruction it wrought in the service of commerce.

“I didn’t want to report on the world, I wanted to change the world.”

Tom Hayden was a combination of peace and environmental activist, author, humanitarian, political strategist and politician. While a student at the University of Michigan, he was editor of the school newspaper, the Michigan Daily. He wanted to make a difference from the start and, in that vein, joined the Freedom Riders after local and state authorities in the South refused to enforce desegregation of pubic bus systems. He was beaten in rural areas of Georgia and Mississippi and jailed in Albany, Georgia, for attempting to desegregate the railway station there. While in jail, he began drafting a political statement which was to become integral in students organizing to become involved in deciding how they wanted their country to be governed.

He co-founded the activist organization Students for a Democratic Society (SDS) in 1961 (and eventually became president). He was the primary author of their manifesto – “The Port Huron Statement” – the very same work he started in that jail cell in Georgia and which was completed in 1962 with help from fellow activists at a United Auto Workers retreat in Port Huron, Michigan.

The statement laid out what the students saw as the fundamental problems facing the country at the time and outlined a radical vision which articulated a moral set of guidelines for building a better future. It was centered around participatory democracy (a concept which has since entered mainstream thought) and civil disobedience. Arms control and race relations were major issues in the statement as well as addressing the plague of apathy rampant in U.S. society which was exacerbated by corporate media and the military industrial complex. From the manifesto:

“The American political system is not the democratic model of which its glorifiers speak. In actuality it frustrates democracy by confusing the individual citizen, paralyzing policy discussion and consolidating the irresponsible power of military and business interests.”

(Unfortunately, this sounds all too familiar today as the U.S. has regressed, falling precipitously after all of the gains achieved by hard-working activists in the 1960s and 1970s).

From 1964 to 1968 he lived and worked with poor inner-city residents in Newark, N.J. as part of the Newark Community Union Project. He saw first hand the race rebellion of 1967 and felt it was driven by more than race alone. He wrote about it in his book “Rebellion in Newark: Official Violence and Ghetto Response” which was published in late 1967.

“The issue of civil rights was too much for the establishment to handle. One of the chapters of history that’s least studied by historians is the 300 to 500 riots in the U.S. between 1965 and 1970.”

He also made a controversial visit to North Vietnam in 1967 with Communist Party USA member Herbert Aptheker and Staughton Lynd, a Quaker peace activist. They toured villages and factories as well as meeting with a U.S. prisoner of war whose plane was shot down. He wrote about this experience in his book “The Other Side” which was also published in 1967.

He was convicted along with Abbie Hoffman, Jerry Rubin and others of “crossing state lines to incite a riot” as part of the protest at the 1968 National Democratic Convention. At first they were collectively known as The Chicago 8, but after Black Panther co-founder Bobby Seale (who was bound and gagged during the trial) requested to be tried separately, they became known as The Chicago 7. The convictions were reversed on appeal five years later.

He made another visit to North Vietnam in 1972 with then-wife Jane Fonda which was made into a documentary titled “Introduction To The Enemy” and released in 1974.

“Why should American atrocities be merely unsettling, but a trip to Hanoi unconscionable?”

Also in 1972, Hayden founded The Indochina Peace Campaign to mobilize dissent against the war. It operated until the war ended in 1975.

In 1976, he attempted a run for the U.S. Senate in California, but lost in the democratic primary – though he finished a surprisingly close second to the incumbent, John Tunney. Soon after this he helped found the Campaign for Economic Democracy which promoted solar energy, environmental protection and renter’s rights policies as well as supporting hundreds of people in local political elections around California (many of whom were elected). The organization formed a close association with Governor Jerry Brown.

He wound up entering the world of politics by winning a seat in the California State Assembly in 1982 and served there until 1992. He then served in the California State Senate from 1992 until 2000. He was very active while serving the people of California helping pass over 100 pieces of legislation. He worked diligently on issues from environmental regulation and animal welfare to domestic violence, gang violence and small business tax breaks.

In 1994, while in the state senate, he attempted a run for the Democratic nomination for Governor of California. His pet issue was campaign finance reform. Unfortunately, he lost to Kathleen Brown, sister of former (and future) governor Jerry Brown, who lost the election to incumbent Pete Wilson. He also made a bid to become mayor of Los Angeles in 1997, but the political climate was too conservative for someone so progressive to win these nominations.

After his political career, he went back to his old passion of writing. He contributed pieces to publications such as the N.Y. Times and The Nation and became the director of the Peace and Justice Resource Center in Culver City, California. He shared his ideas about important political and social issues for the rest of his life and supported causes such as environmental protection, human and animal rights and ending U.S. involvement in war. During the U.S. occupation of Iraq under the Bush Jr. administration, he wrote and spoke publicly advocating for Congressional hearings on withdrawing troops from that decimated country.

He was also a national co-director of No More Sweatshops!, a group that draws cooperation from community, labor, campus and clergy organizations and works to end slave labor, child labor, danger in the workplace and environmental damage in poor countries.

Something interesting to end with is a comment Tom Hayden made in 2007 at the wedding of his son Troy, that speaks volumes about his integrity after so many years on the front lines of battling the powers that be. He said that he “was especially happy” about his son’s union with actress Simone Bent, who is black, because, among other things, it was “another step in a long-term goal of mine: the peaceful, nonviolent disappearance of the white race.”