There they go again.

The Donald trump administration has continued their violently oppressive Israel Before Human Rights strategy by denying a visa to enter the U.S. to Dr. Hanan Ashrawi, a highly respected Palestinian leader, legislator, scholar and activist who was Dean of the Faculty of Arts at Birzeit University and headed its Legal Aid Committee since some time back in the 1970s. She also served as a member of the Leadership Committee and official spokesperson of the Palestinian delegation to the Middle East peace process, going back to the 1991 Madrid Peace Conference.

The following paragraph is from Wikipedia:

”Ashrawi is the recipient of numerous awards from all over the world, including the distinguished French decoration, “d’Officier de l’Ordre National de la Légion d’Honneur” in 2016; the 2005 Mahatma Gandhi International Award for Peace and Reconciliation; the 2003 Sydney Peace Prize; the 2002 Olof Palme Prize; the 1999 International Women of Hope “Bread and Roses”; the Defender of Democracy Award – Parliamentarians for Global Action; the 50 Women of the Century; the 1996 Jane Addams International Women’s Leadership Award; the Pearl S. Buck Foundation Women’s Award; the 1994 Pio Manzu Gold Medal Peace Award; and the 1992 Marissa Bellisario International Peace Award.”

She has written quite a few books, articles, poems and short stories on Palestinian politics, literature and culture. Her book “This Side of Peace” earned critical acclaim around the world (and, unlike some barbaric people involved in this embarrassing pathetic political machination, she actually wrote it herself). She received a Bachelor of Arts degree and a Master of Arts degree from the American University of Beirut as well as a Doctorate in Philosophy in Medieval and Comparative Literature from the University of Virginia.

Additionally, she has received 11 doctorates from universities in the U.S., Canada, Europe, and the Arab world. Not too shabby.

How does this resume compare with the deranged, narcissistic rapist and economic terrorist who went from real estate con man to dysfunctional bile-TV game show host to “leader” of the executive branch of the United States of America? 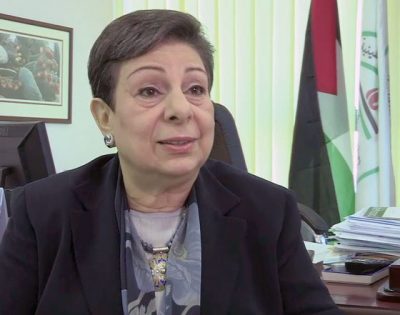 Upon hearing the news that Palestinian diplomat Dr. Hanan Ashrawihad been denied entry to the United States on a speaking engagement, my husband wrote an e-mail to Indiana Senator Mike Braun titled, ‘Tell State Dept & Trump to give Ashrawi a visa now!’

His letter was brief and to the point:

The State Department under President Trump is denying widely respected Palestinian leader Hanan Ashrawi a visa to visit the U.S.

Ashrawi has visited the U.S. frequently ever since she studied for her PhD here several decades ago. She has met with every Secretary of State since George Schultz and every President since President George Bush Senior.

Ashrawi has been critical of the Trump administration.

US law does not authorize the refusal of visas based solely on political statements or views. A State Department spokesman says: ‘Visas may be denied…