Posted by ashiftinconsciousness on May 16, 2018 in Animal Abuse, Compassion, Health Issues, Human Evolution, The Politics of Oppression

Mad Scientists Live Among Us:

It used to be science fiction, but not anymore.

There are people living among us who believe it’s OK to “play god” (as the saying goes) and intervene in millions of years of evolution by engineering living beings as if they were tools to use at work or toys for our children to play with.

Pigs are being genetically engineered.

This is not breeding the largest animals in the hope they mate and have large offspring or breeding to make certain traits dominant (which is questionable behavior itself, but not insidious and despicable). This is manipulating genetic material to change the animal at a cellular level.

It’s already happened with chickens and salmon. We design chickens to have larger breasts. They live in misery due to this unnatural experimentation, but people have larger pieces of their favorite chicken body part to eat. Salmon are designed to be larger. They will likely devour and render extinct natural salmon in the rivers they wind up escaping to and inhabiting, but we have larger pieces of fish on our already too large dinner plates.

Now it’s happening to the world’s favorite animal to eat.

This is truly twisted. Setting aside the cruelty of imprisoning living beings simply to collect them as food as if they were canned goods on a shelf, how can a human being believe it’s acceptable to manipulate the genetic material of sensitive and intelligent animals for our pleasure? Seriously? Where is the outrage? We see ranting and raving among the intelligence-challenged among us when their huge containers of sugared drinks (which contribute to cancers) are limited or when hard-working people (especially black- and brown-skinned) demand a living wage, but intelligent animals imprisoned and enduring a lifetime of torture is somehow tolerable.

The trump Effect is multi-layered:
Having a psychotic buffoon in the White House doesn’t mean that we should focus on him and ignore everything else going on in the world. Hopefully more people now realize that that is the reason the corporate powers allowed the election to swing in the direction of an incredibly ignorant and dysfunctional imbecile – to keep us distracted from the true corporate agenda of executives increasing their bank accounts while securing more control over our lives. (I’m sure “lowering the bar” of respectability in government is a convenient extra they thought about as well)

It’s terrifying that Capitalism has so deeply infected the human mind that the “good guys” are merely concerned with regulating such despicable behavior – as if they’ve accepted this as “business as usual” instead of taking a proper moral stance. This is horrible on so many levels beyond simply needing to do battle to regulate an industry that treats living beings as objects. Yes, human beings are treated as objects, too, but that does not make this any less sickening.

We not only eat these animals, we torture them for the majority of their lives. Why? The livestock industry tortures them because it increases corporate profit and is more convenient than treating them like the living beings they are. But that’s only part of the story about accepted animal torture.

There are charities that raise billions of dollars from people with good intentions with the stated goal of finding cures for human diseases despite the fact that these experiments rarely prove to be effective models for human disease studies.

And there are people who actually make an impressive amount of money breeding animals for a very short life of excruciating pain and suffering. These breeders sell their “products” to researchers who test every type of being from mice to primates for so-called beauty products, household cleaning products and many other products we use without thinking about the excessive cruelty involved.

Pharmaceutical companies test experimental drugs on many animals prior to clinical studies to legally prove the drugs are safe for humans. They use animals to avoid lawsuits because we have no laws that uphold the rights to a life without suffering – for animals. Of course this is not surprising considering the wickedly calculating business model adopted in a field in which thousands of human deaths are merely part of the equation and factored into the bottom line.

How many people actually believe animals are nothing more than food for us? I know the bible seems to preach that, but we don’t stone women for “cheating” on an abusive husband or burn men at the stake for not being circumcised so we obviously can’t use that book of stories as a guideline for behavior.

What will it take to evolve past this barbaric point in our history? We willingly hand power over our existence to ruthless predators and then act surprised when they show that they never cared about anything but collecting more wealth and/or consolidating more power. The disconnect between cause and effect is difficult to fathom. It’s frightening that clarity of thought and the ability to distinguish the difference between moral behavior and blind greed is becoming a thing of the past.

Do many people wonder just when it was that we slipped into this abyss of depravity in which savage indifference to suffering is acceptable? Or have we been so cleverly conditioned that the majority of human beings have lost the capacity to feel empathy for those different than ourselves? And have the rest of us who still have compassion in our hearts become conditioned for cowardly complacency? Have we convinced ourselves that time will heal all wounds and we should wait for the change we expect to arrive without effort?

Or should we take responsibility and create that change? 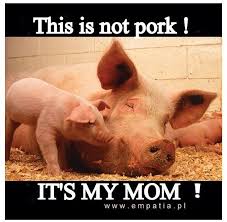 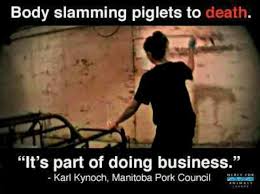 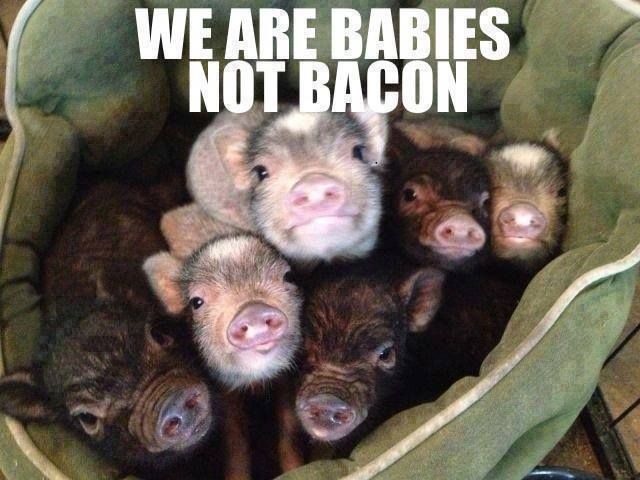 The following is from The Organic Consumers Association:

Wait ‘til you hear what kind of GMO animals Recombinetics, Inc., the “Monsanto of the genetically modified animal industry,” wants to unleash on the market.

Among other things, Recombinetics wants to genetically engineer pigs specifically to withstand a miserable life in factory farms.

Not only that, but the St. Paul, Minn.-based biotech company wants to keep the U.S. Food & Drug Administration (FDA) from having anything to do with regulating GMO pigs, or any other GMO animals that could end up in the U.S. food supply.

The advantage for Recombinetics is obvious. The FDA uses its regulations for animal drugs to review the safety of genetically modified food animals, such as GMO salmon. But the U.S. Department of Agriculture (USDA) has no process whatsoever for evaluating the safety of animals created through novel technologies, including the gene editing technology used by Recombinetics.

If the company’s plan succeeds, this would be the most drastic deregulation of biotechnology to date—and gene editing is just too risky to deregulate.

TAKE ACTION: Tell the USDA: GMO animals need to be thoroughly safety tested by the FDA!

← When Assisted Suicide Becomes a Viable Option
The World Is Watching →