Trust is not a commodity. Honor is not a reward.
17 Comments

A Photographic Walk Around San Francisco

Posted by ashiftinconsciousness on November 8, 2017 in Travel 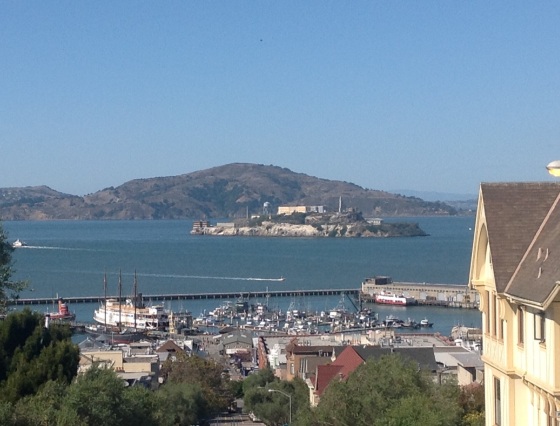 A view of Alcatraz Island from an elevated section of Hyde St., looking past the Hyde St. Pier.

Another view of Alcatraz Island, this one from a beach along Jefferson St. near the Maritime Museum and Ghirardelli Square.

(Yes, I am fascinated by Alcatraz) 😆

In the foreground of this photo of the Golden Gate Bridge taken from Black Point is the Fort Mason Festival Pavilion where I happened upon the San Francisco Public Library’s 53rd Annual Big Book Sale. I was like a kid in a candy store. This was a warehouse filled with thousands of books for sale – each for the price of $1. I saw every genre, from early printings of classics and textbooks to science fiction and drugstore novels. I wished for a moment I had a car trunk to fill, but I had to contain my enthusiasm and purchase just 12 paperback books. 😦

My lunch companions at a thin strip of park along Marina Blvd. between the San Francisco Marina Yacht Harbor and Marina Green Triangle. 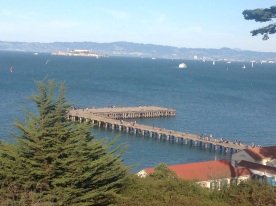 On the left, a group of trees near Crissy Field Marsh I found interesting, and on the right, a view of Torpedo Wharf from the hills on the SF side of the Golden Gate Bridge.

Views of the Golden Gate Bridge from various points along a trail that winds its way up a steep climb from Marine Dr. to the bridge. In the background in the photo on the left is the Marin Headlands. In the background of the two photos on the right are Lime Point and Horseshoe Bay. Next to Horseshoe Bay is Fort Baker, named after a Senator who lost his life during the Battle of Ball’s Bluff in Virginia during the Civil War.

17 comments on “A Photographic Walk Around San Francisco”