Trust is not a commodity. Honor is not a reward.
7 Comments

Posted by ashiftinconsciousness on May 6, 2017 in Observations

San Francisco: An interesting place with things to do. It’s known as a liberal, forward thinking city, but you better think twice if you believe you can avoid the perverted mania of Capitalism. You need a car here – not to get around, though, there’s plenty of mass transit. You need a car full of money to afford anything in this incredibly expensive city. Google and the infamous bio-tech companies have thrown the economy out of touch with normalcy and created a proliferation of homelessness here in the former hippie capital of the world. How bizarrely poetic in an Edgar Allen Poe sort of way…
An interesting side thought: the most difficult ticket to get here seems to be a ferry to Alcatrazz. What does that say about us as a society?

Oakland: The birthplace of the Black Panther Party in 1966, known as a place of anarchism and art (similar to the Lower East Side in my hometown). There’s still a hint of the old Oakland here: knowledgeable people with a desire to change the status quo, walls spray-painted with colorful political statements, Black Lives Matter and Immigrants Welcome Here signs all over the place. And a lot of places with a heavy feeling of desperation and surrendering to inevitable doom. There are also areas of gentrification which is assuredly an attempt by certain elements in the area to pacify the latent Capitalist tendencies, decrease civil disobedience and bring about a more obedient population.

I had an interesting conversation with a homeless man camped out near a BART station. I gave him money, but let him know I was more interested in giving him compassion. I told him that I’m not in an ideal financial situation myself right now and understand how he feels. I expressed sadness that so many people assume homeless people are drug addicts, criminals and losers without ambition. He told me a few stories of horrible treatment and cold indifference by ordinary, hard-working people who obey the dominant culture and thrive – the “good” people. And he mentioned that it’s gotten worse in recent months. Fortunately, he also told of generosity by people that was sufficient for him to get a motel room most nights for himself and his wife. While I was happy that he and his wife could sleep in a bed most nights, I couldn’t help thinking of how inefficient this is. (We’re constantly assaulted with talk of the importance of efficiency by corporate media). That same amount of money could provide them with a more comfortable full-time home and other essentials if collected in taxes in a compassionate society dedicated to providing life’s necessities for everyone. But, along came the 2016 election …

… and we took a sick, twisted turn into a more Fascist direction which shows a callousness for fellow citizens that probably even surprised some of the architects of the election. I doubt they honestly felt confident they could pull off such a stunt of obviously violent intentions. So, homelessness will continue to increase and the price of a human life will continue to decrease.

Emeryville, California: I call this town LipstickOnAPigville. It’s a worn out looking place along the interstate with factory buildings and hotels, obviously a stopover between the cities of San Francisco and Oakland for many years. Someone got the idea to give it a superficial makeover and turn it into a pre-fab Disneyesque shopping area with apartment complexes. The problem is that it’s a small, boring place where Greenwich Village rents are charged for apartments in old, poorly constructed buildings with infrastructure from the 1960s. Old vent fans and heating ducts that wake you at night, low budget plumbing, faucets that wobble, locks that break too often, laundry rooms with dryers that are hot some of the time, hallway carpeting that’s rarely vacuumed – everything seems to be given a quick fix, typical of scam artists. (Of course, I didn’t go inside every apartment, but still…)

The people in the office who answer phones and deal with prospective clients are basically pickpockets who would have sold snake oil in the late 19th century. A couple of tenants told me about them stretching the truth quite long. Hearing one of them speak one afternoon I wondered if he puts his smile on a night table before going to bed at night.

For my ride back east, I checked prices on alternatives to flying and received a good price to go with Amtrak. I liked the idea of seeing places around the country I’ve never seen before and had never before been on an Amtrak train.

Amtrak: Nice views and comfortable seats, but no access to the internet and the food, snacks and drinks are extremely limited. I only ate one meal in the dining car: a small breakfast of tasteless scrambled eggs; average tasting potatoes; an ordinary biscuit and weak, below average tasting coffee with artificial creamer for $12 plus an expected tip. The alternative to the dining car was the “cafe car” which is a tiny room crammed with pre-packaged hot dogs, cheeseburgers and sandwiches (all of which had pig and/or cow meat), a variety of chips, warm water and soda and weak coffee without actual milk or cream. There was an adjoining room with two tables. And the prices were obscene: $4.50 for a small bottle of WARM water and a tiny bag of popcorn that goes for 50 cents in a deli. Also, for those in the coach section, alcohol brought on board couldn’t be consumed, but alcohol purchased from Amtrak could be.

The highlight of the trip east was on the train from Chicago to New York. It was a cool conversation with a guy by the name of Claude, an old school dude from St. Louis who works out of Chicago. He ran the cafe car. We talked a while about music: throwing around names like Jimmy Nolan, Gil Scott-Heron, Jimi Hendrix, Richie Havens, Santana, Public Enemy, Marcus Miller, Victor Wooten, Stevie Ray Vaughn, The Brothers Johnson, Stanley Clarke, Bootsy Collins and Run DMC. Yeah, we talked a while and we both dig bass…

We also discussed the sad (in our opinions) transformation of television over the years from shows like Kung Fu, Sanford & Son, Barney Miller (great bass in the theme song) and Good Times to vampires, zombies and wildly popular shows glorifying serious dysfunction. Laughing with Claude for a half hour or so made the obscene prices of crappy food less painful.

I saw a lot of beautiful scenery in eastern California, part of Nevada and a bit of Utah. 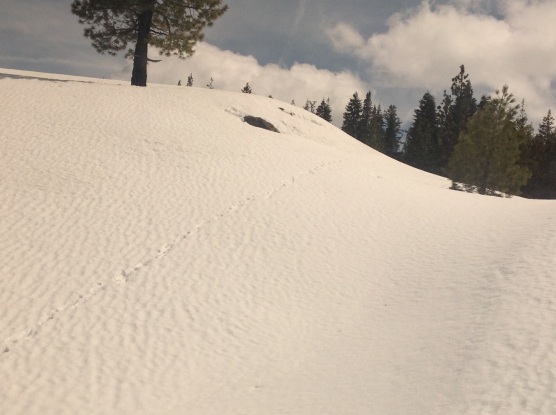 Colorado: I saw incredible scenery – snow-capped mountains and impressive rock formations similar to New Mexico, Arizona and Utah. I knew about the snow-capped peaks of the Rocky Mountains, but was surprised at the sensational red rock mountains. I didn’t know that type of scenery existed so far north. It was very enjoyable. 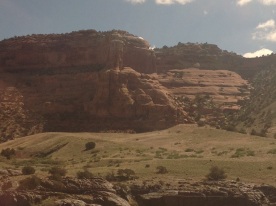 Denver: A mix of rain and snow and only 25 minutes at the train station made it difficult to see much or to enjoy the little I could see: a noisy, crowded bar that served food, an over-priced coffee shop with pre-packaged sandwiches and deli salads and two gift shops inside the station and a brewery and a few restaurants and bars outside the station.

This is a shot outside Denver while snow was falling (yes, crappy quality): 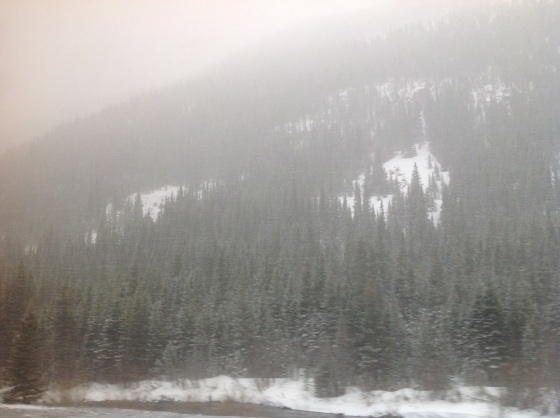 Chicago: There was steady rain for hours, the entire time I was there. I struck up a conversation with a cool local woman in the station. She agreed with my comments about the current political climate and about political correctness – enough to laugh heartily and give me a pound. I asked her if a restaurant I enjoyed my first time in Chicago was easy to get to. This friendly black woman said to me:

“Oh, that’s on the west side of town. YOU don’t want to go to that neighborhood alone. I don’t even go there alone. You know what I’m saying?”

I replied, “I went there with a couple of people my first visit to Chicago. I liked it. Great food.”

“And nothing happened to you? You must have been with Black people.”

A chuckle, then a serious expression and, again, with a hand on my arm, “Don’t go there by yourself.”

I was disappointed by the woman’s admonition. I was looking forward to a delicious meal at a place called McArthur’s I had eaten at years ago with a friend and a Chicago acquaintance we’d befriended in a hotel lobby.

Upon entering the waiting room at the station, I saw a sign that stated Amtrak offers free wi-fi to customers. I figured I’d look up directions to the restaurant anyway. Shit, it wasn’t even dark yet. However…

Terms and Conditions of Use
Amtrak assumes no responsibility for the safety of equipment. Access and use of this system is restricted, monitored and recorded. By using Amtrak owned and supported computer systems I acknowledge that I [have read], am subject to, and bound by, all of Amtrak’s policies regarding computer usage, information security and records management and specifically Amtrak Policy 3.1.x Computer Security & Usage. I acknowledge that all Electronically Stored Information created or utilized through Amtrak’s computer systems are considered property of Amtrak and may only be used and distributed in accordance with Amtrak policies.
Disclaimer

I acknowledge that connecting to the Amtrak network through personal computer equipment is a privilege granted by Amtrak and that there is reduced expectation of privacy for such use and privilege. Abuse of such privileges may subject my personal computer equipment to legal holds and/or physical possession by Amtrak. Amtrak has a right but not a duty to monitor and access all electronic communications. Access or use of this system without authorization and/or in violation of Amtrak’s policies may lead to disciplinary action up to and including termination, possible criminal prosecution and potential personal liability for your actions.

By entering “I agree” below, you are entering into a binding agreement.

Wow. Just to temporarily use their wifi. Now, of course, only a delusional, paranoid conspiracy theorist would be concerned about giving up rights to privacy to be able to get online for a few minutes.

I ate at a nearby fast food coffee joint, went back to the station (drenched from the rain), took out a book and read until my train boarded.

7 comments on “Random Observations While Traversing This Insane Country”