Trust is not a commodity. Honor is not a reward.
8 Comments

Posted by ashiftinconsciousness on May 2, 2017 in Uncategorized

I attended the May Day Rally at Foley Square in Manhattan Monday and intended to write something about it, but things happened that prevented me from doing so. I had to take care of a sick cat, feed homeless cats and walk a few rescue dogs. Also, there is a horrible internet connection where I’m staying so I didn’t have time to do more than give a brief description and add a few pictures.

I hope everyone enjoyed their May Day this year.

Mayor de Blasio, Public Advocate Letitia James, City Council Speaker Melissa Mark-Viverito and City Comptroller Scott Stringer were among the speakers at the rally, but the emcee for the event was an intelligent and powerful speaker, Linda Sarsour. She is a Palestinian Muslim activist from Queens and she did an amazing job of firing up as well as educating the crowd and announcing the other speakers and the musical guests.

The music was diverse and amazing. Performers were M.A.K.U (a band of Colombian immigrants), The Peace Poets (from the South Bronx), Institute of Flyer Learning (from Brooklyn), Bodega Dream, The Resistance Band, Fogo Azul (an all woman band of drummers from around NYC) and Flor de Toloache (a Mariachi band of 3 women from NYC).

The evening ended with unexpected comedy. A group of about a dozen trump supporters brought a U.S. flag and started chanting “America, America…” and were immediately drowned out by a chant of “No ban, no wall” by a small portion of the crowd. Most people were too busy dancing to notice the embarrassingly pathetic group of counter-protesters (I’m struggling for the proper words in an attempt to be civil toward seriously uncivilized beings). It was akin to a fly buzzing by your face that you wave away with your hand.

At first I thought it was just a few misguided people trying to show patriotism in accordance with the idea of immigrants coming to the U.S. to make a better life. I couldn’t see them and only heard them for a few seconds before their voices were drowned out. After the rally, they started a shouting match with one overzealous person who’d attended the rally, then a young man who wanted to make peace with them attempted to engage them in civil discourse, but that didn’t work as they are inherently uncivilized people who base their ideology on hate and fear. I saw one of them yell “trump is president. Get over it!” He tried to look brave, but I saw fear in his eyes. NYPD hurried in to keep the peace and started to circle the entire group of people from both sides while a strange discussion continued as I left.

Below are a few pictures: 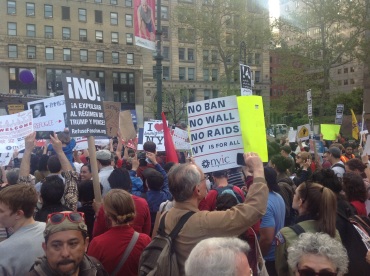 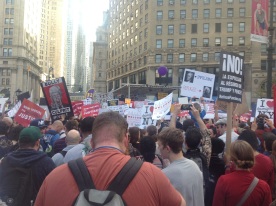 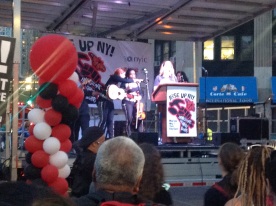 Here’s my favorite picture from the event, a surprise guest: 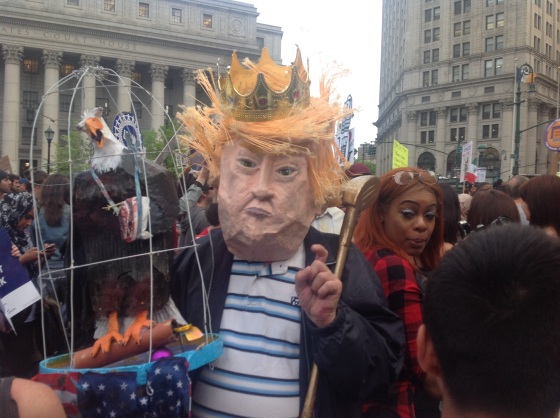 ← Can Mumia Abu-Jamal Receive Justice In A Judicial System Rife With Corruption?
Random Observations While Traversing This Insane Country →

8 comments on “May Day Rally at Foley Square NYC”