Trust is not a commodity. Honor is not a reward.
8 Comments

Richie Havens was one of the most uniquely talented singer/guitarists to ever come along. He created a style of guitar playing that could provoke the imagination while bringing deep emotions to the surface. It could evoke sadness and longing, but it could also bring forth warmth, love and a peacefulness in a way that few artists have been able to achieve. His one-of-a-kind voice, a smooth yet powerful blend of soul, gospel, folk and blues, did the same. The combination of the two was truly awe-inspiring.

He was born in Brooklyn, N.Y. to a Native American father and a West Indian mother. His paternal grandfather, from Blackfoot country in the Montana/North Dakota area, hit the road with the Buffalo Bill Wild West show, stopped off in the N.Y.C. area and wound up on the Shinnecock Reservation in Long Island, N.Y.

The family wound up in Brooklyn where Richie grew up with eight younger siblings. He performed with several street corner doo-wop groups in Bedford-Stuyvesant as well as with the McCrea Gospel Singers as a teenager. This, no doubt, is where he started to hone the distinct vocal style that would help make him a legend in music.

He left Brooklyn looking for different avenues to express himself artistically and wound up in Greenwich Village.

“I saw the Village as a place to escape to, in order to express yourself. I had first gone there during the Beatnik days of the 1950s to perform poetry, then I drew portraits for two years and stayed up all night listening to folk music in the clubs. It took a while before I thought of picking up a guitar.”

Stardom arrived when Richie opened Woodstock in August 1969. As many of the other performers were having trouble getting to the concert, he was asked to continue playing as long as he could. His set lasted 3 hours. He so enthralled the audience he was called back for several encores. He finished by freestyling an old spiritual known as “Motherless Child.”

“Freedom” became an iconic song of the hippie era and one of the most uniquely heartfelt songs of modern times.

“I’d already played every song I knew and I was stalling, asking for more guitar and mic, trying to think of something else to play – and then it just came to me…The establishment was foolish enough to give us all this freedom and we used it in every way we could.”

Two weeks after Woodstock, he appeared at the Isle of Wight Festival in England. His soaring popularity allowed him to start his own record label, Stormy Forest. He established himself solidly as an artist with several albums that were commercially successful as well as critically acclaimed including “Stonehenge”, “The Great Blind Degree”, “Portfolio” and “Mixed Bag II.” But his most successful album was “Alarm Clock” which opened with a cover of the Beatles song “Here Comes The Sun.” This song was released as a single and reached Billboard’s Top Twenty. 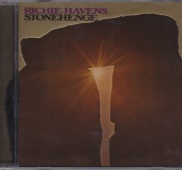 He also made appearances on popular TV shows such as The Ed Sullivan Show and The Tonight Show during this time. His performance on The Tonight Show got such an arousing reception from the audience – applause continued throughout and after the commercial break – that Johnny Carson requested he return to perform the following night.

Richie’s engaging personality and continued popularity got him acting gigs in the 1970s. He starred in the original stage production of “The Who’s Tommy” in 1972 and appeared in several movies. He portrayed Othello in the 1974 film “Catch My Soul” as well as appearing in “Greased Lightning”, “The Boss’ Son”, Bob Dylan’s “Hearts of Fire”, “Street Hunter”, “Perfect Harmony”, “I’m Not There” and “The Girl, the Gold Watch & Dynamite.”

Being a truly gifted artist, Richie branched into painting to expand upon his creative abilities. These are two examples of his work, “Mandala VII and “Spectrum III”: 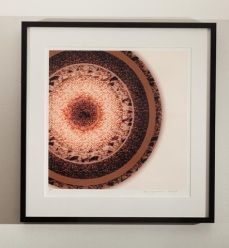 Spectrum III
“My artwork has always been a way to fill the space left in a room once the song has ended, when everything goes quiet and you’re left with colors and images and feelings.”

While his popularity declined in later years, he enjoyed continued fame and success which include performing at a presidential inauguration and many charitable events.

In 1991, Havens became the 20th living recipient of the Peace Abbey Courage of Conscience Award and, in 1999, he performed at the Tibetan Freedom Festival in front of over 100,000 people.

In 2003, the National Music Council awarded him the American Eagle Award as an iconic part of America’s musical heritage and for providing “a rare and inspiring voice of eloquence, integrity and social responsibility.”

On October 15, 2006, Havens was inducted into the Long Island Music Hall of Fame.

In 2008, he performed at the opening ceremony of the Cannes Film Festival at the request of the jury president, Sean Penn.

If Richie Havens had done nothing more than make beautiful music and write socially conscious songs, he would be worthy of being remembered. But he did much more than that in his life. He was an activist who raised awareness of several important issues. One such issue he delved wholeheartedly into was educating young people about environmental issues.

In the mid-1970s, he co-founded the Northwind Undersea Institute, an oceanographic children’s museum on City Island in the Bronx. That led to the creation of the Natural Guard, an organization Havens described as “…a way of helping kids learn that they can have a hands-on role in affecting the environment. Children study the land, water and air in their own communities and see how they can make positive changes from something as simple as planting a garden in an abandoned lot.”

Another issue he involved himself in was civil rights. In July of 1978 he performed at the Benefit Concert for The Longest Walk. This was an Indigenous American spiritual walk from the infamous Alcatraz Prison in San Francisco Bay to Washington, D.C. The purpose of the event was to raise awareness of U.S. legislation that abrogated “Indian” treaties and to demand affirmation of these treaties. He also spoke eloquently about racial unrest across the country.

There are many other things to write about this amazing human being who graced so many lives and made the world a better place than it would have been without him, but I have a personal story to add.

I attended a Gil Scott-Heron show at B.B. King’s in Times Square in 2009 and was handing out free CDs of my music before the show. As I was speaking with a fellow musician near the entrance, a group of people approached. I wasn’t looking at them, but felt a presence that caused me stop and turn around. I was face to face with Richie Havens. His engaging smile caused a huge grin to appear on my face and I proceeded to tell him about a show in a small club in Long Island in which I saw him perform in the early 1980s. Richie Havens, legendary musician, left his entourage waiting at the entrance and engaged me (and the person I had been speaking with) in conversation for ten minutes. He remembered the show I’d been to and spoke about it with an infectious smile. It was obvious he truly enjoyed mixing with his fans. When a woman from his entourage stared impatiently at him from the opened door, he replied with a smile “I’m with my people.”

This was one of the kindest, most genuine and most peaceful people I’d ever met. I was just some raggedly-dressed guy handing out CDs on the street and he took the time to speak with me. And he had no pretenses, no attitude. We spoke as if we were friends. After Gil Scott-Heron finished performing, I saw Richie at the bar and he delayed leaving to continue our conversation. It’s a memory I will always treasure.

“Say not in grief ‘he is no more’, but live in thankfulness that he was.”